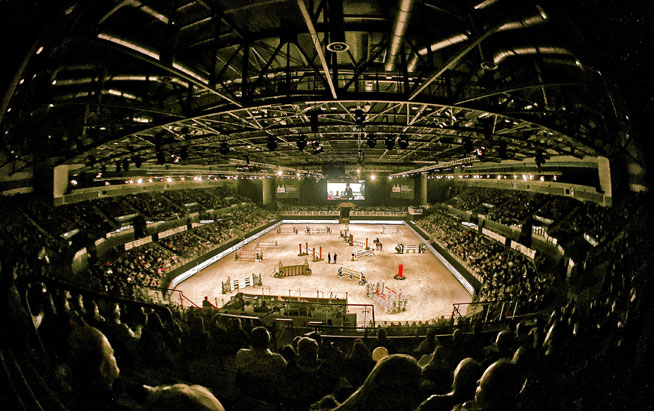 ACC Liverpool was transformed for the inaugural Liverpool International Horse Show,  with more than 1,000 tons of sand and surface material lining the arena floor. Purpose-built stables were installed, while 600 jump fences were built during the six-show event from 1 to 3 January. Around 30,000 visitors attended the three-day event featuring show jumping, entertainment and 200 horses.

Nina Barbour, show organiser, said: “We are thrilled with the reaction to the show, the stands were packed and the city of Liverpool was buzzing with excitement for the whole weekend. The venue was outstanding in its transformation, and in the future we look forward to establishing the event in the sporting diary and in Liverpool’s social calendar, over the Christmas and New Year holiday."

Echo Arena Liverpool was transformed to include a shopping village, VIP viewing platform, champagne bar and specially constructed stables in its multi-storey car park, basement and along the adjacent Keel Wharf.

Attractions included a ‘Grand National’ of Shetland ponies, a performance by The Bootleg Beatles and featured some of the UK’s best riders including Team GB’s gold medallists. There were also live performances and tricks from stunt rider Clemence Faivre and her Lusitano horses.

Bob Prattey, chief executive of The ACC Liverpool Group, said: “The inaugural Liverpool International Horse Show was a real coup for the city and for the venue. “It provided the perfect way for families to start the New Year and to kick off the Olympic year. Our venue looked spectacular and was used in ways like never before. We look forward to welcoming the event back in 2017 as a key feature of our growing event calendar.”