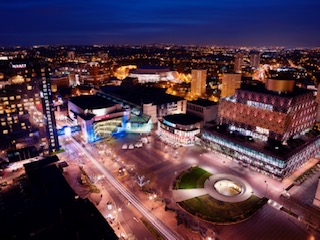 The CHS Group has announced today the launch of the CHS Birmingham show, the group’s second exhibition aimed at the meetings, events and hospitality industry. The launch follows on from another successful CHS Leeds exhibition and the group’s 10 th anniversary earlier this year. The new launch also forms part of the group’s new growth strategy and its vision to be ‘of service’ to its exhibitor and visitor communities.

The event will take place 27 th October 2020 at the ICC Birmingham, who will be key strategic partners in the launch, alongside the city of Birmingham and the wider West Midlands region. “We’re delighted to bring CHS to Birmingham, it’s a stunning city with an amazing story to tell meeting, hospitality and event professionals,” comments Emma Cartmell, Chief Executive Officer, CHS Group.

“It’s also right in the centre of one of the richest regions for event professionals and businesses in the UK. From West to East Midlands, across the country into the ‘event agency belt’, we’re right on the doorstep of some of the most dynamic event professionals in the word,” continues Emma.

CHS Birmingham is also creating partnerships throughout the region, to ensure the event replicates the atmosphere that has been built over the last 10 years in Leeds. “Our secret sauce in Leeds was always to create a world class event that belongs to the city, and we’re going to do exactly the same in Birmingham. This is a city that deserves its own industry event, and we’re going to deliver something really special for it,” concludes Emma.

Last month, CHS Group announced its strategy and vision for the business. The creation of CHS Birmingham is the first in a number of new initiatives to be launched by the group over the next 24 months.